The Soviet research vessel "Sevastopol" arrived in Bergen on 16 February 1958. On board were eight scholars who were to resume the marine research cooperation that Norway and Russia had established before the Russian Revolution of 1917. Half a year later, Norwegian oceanographers returned the favour by visiting Murmansk. 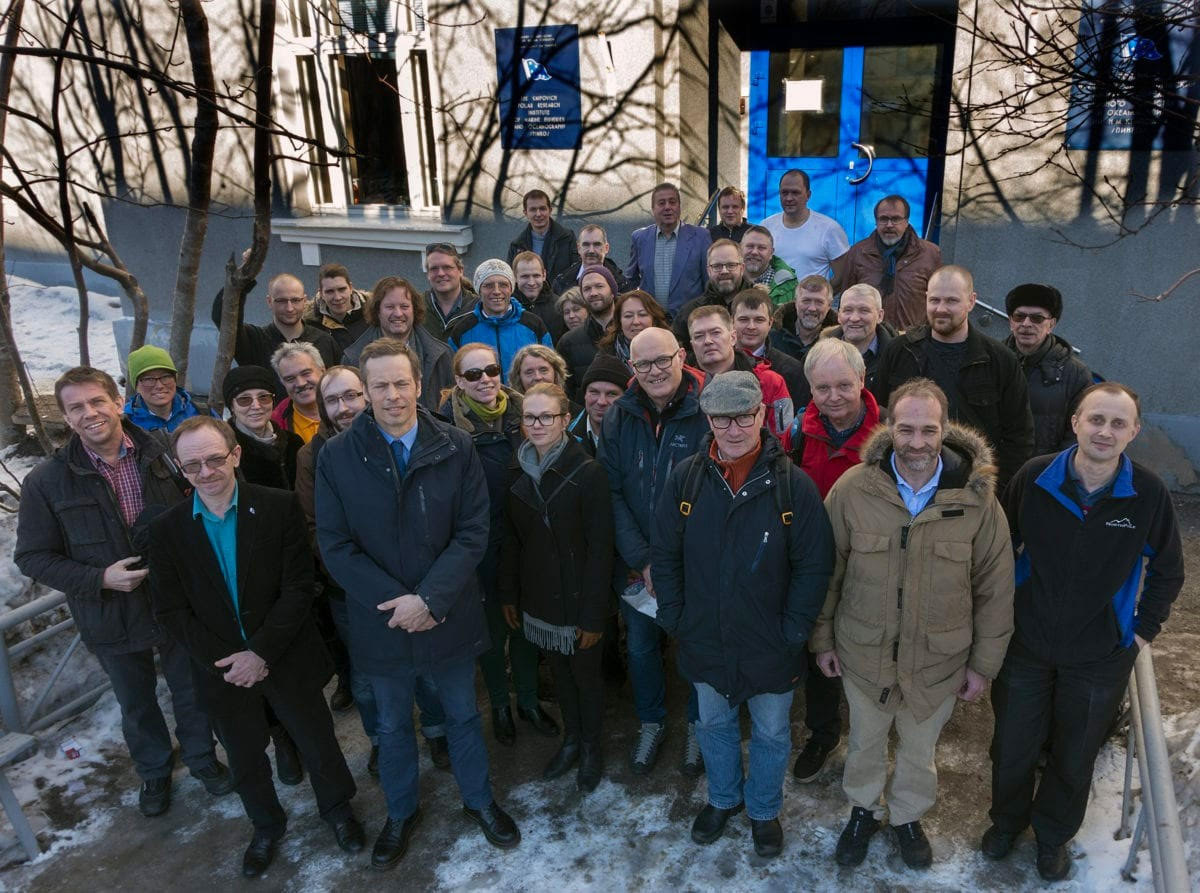 While in Bergen the researchers discussed the situation of the main fish stocks harvested by the Soviet Union (of which Russia was a part 1917-1991) and Norway. Herring and cod were the most important species for both countries, especially what we now call Norwegian spring-spawning herring and northeast arctic cod. The Norwegian researchers were uneasy about the Soviet vessels using a fine-mesh trawl in the Barents Sea, thus also catching a lot of small cod. The Soviet scientists expressed their concerns about Norwegian vessels harvesting far too much small herring in the fjords, most of which was used for the production of fish meal and fish oil.

In the book The Barents Sea (edited by Tore Jakobsen and Vladimir K. Ozhigin and published in 2012) we read that this meeting of marine researchers in Bergen “signalled a break in the wall of silence that separated Soviet and Norwegian scientists who were studying the stocks of jointly exploited fish species and was an important point of departure for future cooperation” (p. 23). In 2018, Norwegian and Russian marine researchers will commemorate the cooperation that began 60 years ago.

The meeting in Bergen was also part of the International Geophysical Year, but the foundation for the cooperation was laid almost three years earlier. Before the communist revolution in Russia in 1917, Norwegian and Russian marine scientists had been in rather close collaboration both within the International Council for the Exploration of the Sea (ICES) and through direct contacts. For example, Norwegian marine research pioneers such as Johan Hjort and Fridtjof Nansen had close contact with Nikolay Knipovich, the man who built the world’s first fisheries research vessel. 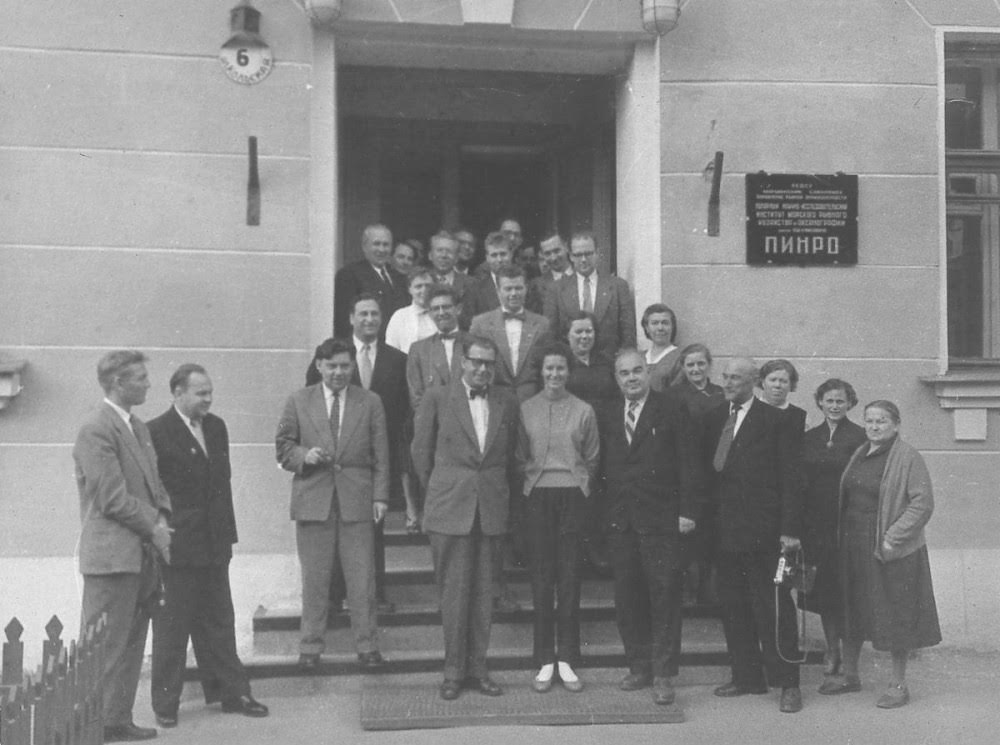 Norwegian marine researchers visited Murmansk in August 1958. Here they have gathered with their Soviet colleagues at the entrance to the Knipovich Polar Research Institute of Marine Fisheries and Oceanography(PINRO). Archive photo: Institute of Marine Research

Started with a summit
The Soviet Union had not collaborated with ICES since the revolution of 1917, but in 1955, ICES resurrected the membership that Tsarist Russia had before the First World War. During a visit to Moscow in November 1955, Norway’s prime minister Einar Gerhardsen he discussed several issues with the leader of the Soviet Union, Nikita Khrushchev. Gerhardsen was of the opinion that Norway and the Soviet Union would be able to cooperate on research. According to Stian Bones, professor of history at UiT The Arctic University of Norway, this was “the start of the Norwegian–Soviet fishing cooperation that developed positively during the Cold War”.

ADVERTISEMENT
In the mid-1950s, marine researchers were not issuing recommendations about maximum quotas for fish stock, either at a national level or through ICES. Moreover, fishing in the Barents Sea and the Norwegian Sea was still a free-for-all. This eventually led to reduced catches, and the data being collected by researchers indicated that the decline in fish populations was due to over-exploitation, not natural fluctuations. Thus, there was a need for more knowledge about fish species and the ocean in general.

The fisheries research programme started soon after. A Soviet delegation visited Norway in March of 1956. It was led by the Soviet Minister of Fisheries, Alexandr Ishkov, who had with him a number of specialists, among them several marine researchers. A Norwegian delegation led by Norway’s Minister of Fisheries, Nils Lysø, visited the Soviet Union in May the same year. Over a 16-day period, they participated in political meetings, visited fish processing plants, joined a trawler on the Barents Sea, and got a close look at the Knipovich Polar Research Institute of Marine Fisheries and Oceanography (PINRO) in Murmansk.

Lysø wrote a detailed report after the trip, where he stated:

“Russian exploration of the sea thus has far greater breadth than ours where the northern seas are concerned, and our fishery interests in those waters are just as great as those of the Russians. […] I want to use (marine researcher) Finn Devold’s words here: ‘we have everything to gain and nothing to lose from such cooperation.’”

Same methods – different opinions
Lysø and Devold discovered that there were few practical obstacles to a potential collaboration between Norwegian and Soviet marine researchers. Their report states: “For scientific research on fish biology and hydrographic surveys, Soviet and Norwegian scientists use essentially the same methods.” However, Lysø also wrote that both Ishkov and the marine researchers from the Soviet Union were critical to the extensive harvest of small herring in Norwegian fjords. They doubted that the herring stock could survive the heavy exploitation of young herring. “Advisor Devold from the Directorate of Fisheries countered this assumption with statistics from tagging studies etc. provided by Norwegian scientists,” wrote Lysø. He went on to state that the Soviet scientists were not convinced, and figured that the Norwegian scientists would eventually “come to the same conclusion as Soviet scientists have reached”. Herring had been on the agenda at the first meeting of Norwegian and Soviet marine researchers in Bergen in 1958, and was discussed repeatedly in the years that followed. The stock of Norwegian spring-spawning herring collapsed around 1970, at which time a 10-year moratorium on fishing this species was introduced.

In the 1950s, Norwegian scientists were worried about extensive Soviet trawling of juvenile cod in the eastern part of the Barents Sea. Nothing in Lysø’s report suggests that he discussed this with Ishkov during his visit to the Soviet Union.

From fry surveys to ecosystem cruises
Norwegian and Soviet researchers met several times in 1958 and the years that followed. The collaboration took a leap forward in 1965, when the first joint Norwegian–Soviet fry survey was carried out in the Barents Sea. The aim was to study recruitment of several fish species, as such information could help predict future developments for various fish stocks. Subsequently, several more joint research surveys were conducted in the Barents Sea to survey shrimp, capelin, cod, young herring, whales, seals, Greenland halibut and king crab. Since 2004, these surveys have been merged into a joint ecosystem survey of the entire Barents Sea. 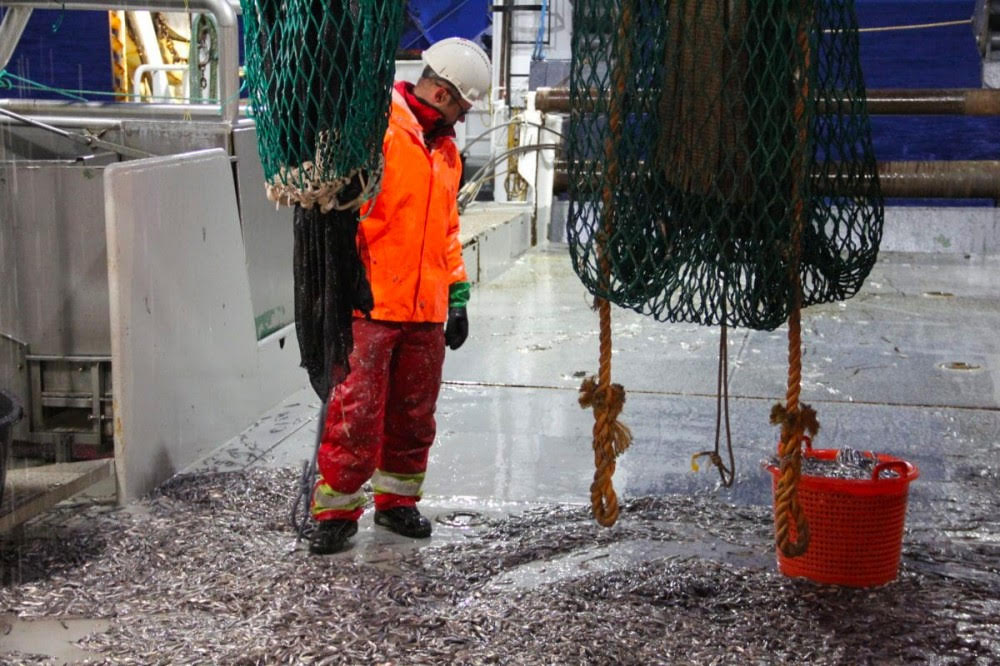 A multitude of samples are taken during the annual Norwegian–Russian ecosystem surveys in the Barents Sea. This photo shows a capelin catch. Photo: Andrey Voronkov / Institute of Marine Research.

The annual Norwegian–Russian ecosystem survey in the Barents Sea is a comprehensive expedition to expand our knowledge. The research vessels cover the Barents Sea “from A to Z” to gather data on all plant and animal life – from phytoplankton to whales. The physical properties of the ocean are examined as well (water temperatures, salinity etc.). The participants record data about waste and count birds; they take samples for analysis of contamination, radioactivity and chemical substances that do not belong in the Barents Sea. As a rule, three Norwegian research vessels cover the Norwegian seas, while a Russian ship covers the Russian sector of the Barents Sea. The participants on a fully-manned expedition include researchers, research technicians, and the crew needed to operate the vessel. Tools range from scoops and bottom trawls to collect samples from the seabed, to fine-mesh nets for sampling plankton in the water column. The researchers also use pelagic trawls to collect fish and other large organisms that live in the water, such as large jellyfish. There are observers on board that count whales and birds and determine their species.

Provide recommendations on quotas
The data collected by the researchers are analysed both to get an overview of the state of the ecosystem in the Barents Sea, and as a foundation for estimating stock populations of commercially harvested fish species. Among other things, the Norwegian–Russian ecosystem survey has revealed that several fish species in the Barents Sea have moved northeast in the last 10-15 years. 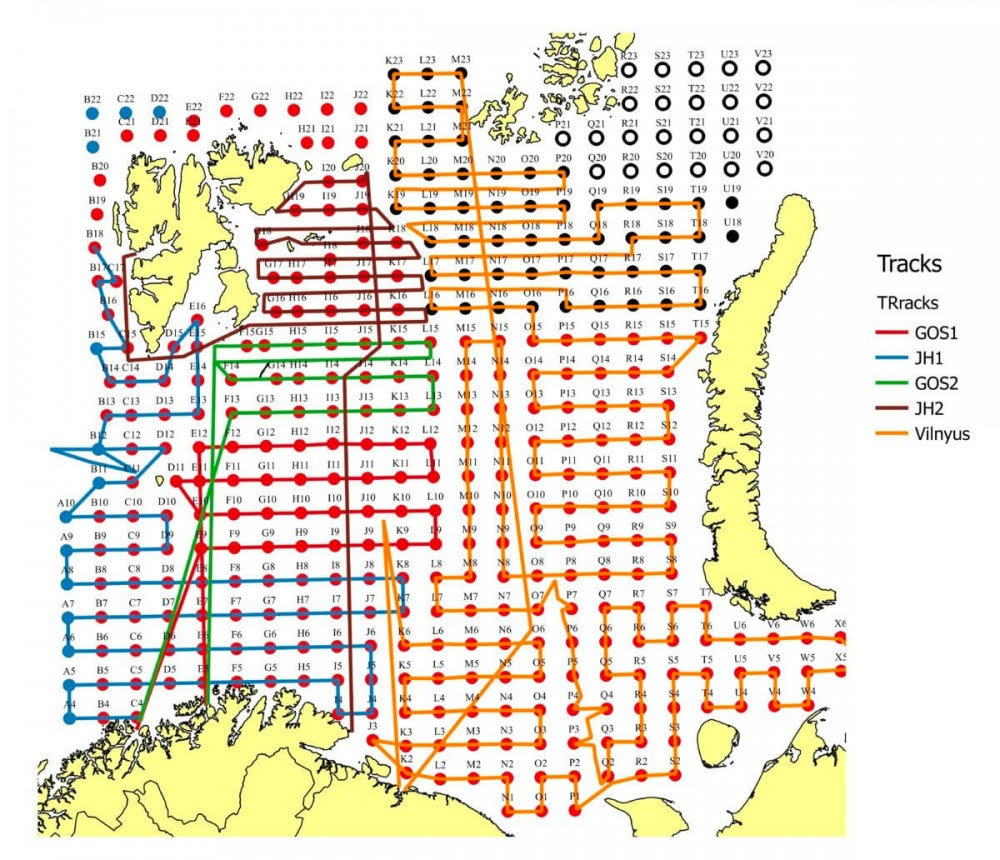 The annual Norwegian–Russian ecosystem survey in the Barents Sea starts in the middle of August and lasts until late September/early October. The map shows the routes the vessels took, and the points mark where samples were taken. Illustration: Institute of Marine Research

The Barents Sea is shared between Norway and Russia, and both countries want their authorities to set rules for sustainable harvesting. The species that provide the largest revenues wander between the Norwegian and the Russian economic zone. Therefore, the annual quotas for capelin, haddock, northeast arctic cod and Greenland halibut are determined by the Joint Norwegian–Russian Fisheries Commission. The commission, which has been setting these quotas since Norway and the Soviet Union established economic zones of 200 nautical miles in 1977, needs reliable data on which to base its decisions. The scientists are the ones who provide those data.

In 2008, political scientists Bente Aasjord and Geir Hønneland analysed the cooperation between Norwegian and Russian marine researchers. One of their conclusions was that “the scientific basis for managing shared stocks in the Barents Sea is a basic premise for, and a driving force within the Norwegian/Russian fisheries relationship. Therefore, the marine research cooperation is not only a scientific collaboration, but also a foreign policy arena.”

Nevertheless, politics has not been a part of the research collaboration, according to Odd Nakken, former director of the Institute of Marine Research. He participated in joint expeditions and research meetings during the Cold War.

“We only discussed professional issues, or we told each other what we did in our free time, or talked about our families,” he said. 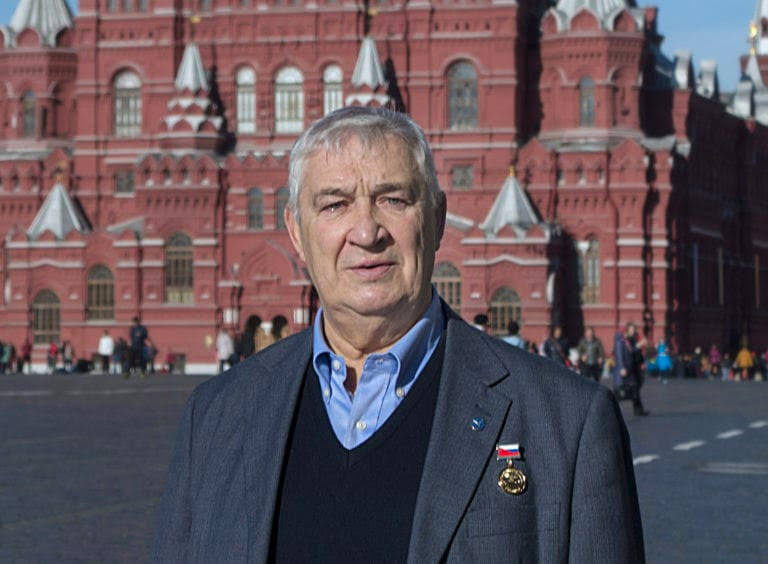 Vyacheslav Zilanov describes how his former boss Alexandr Ishkov at the Ministry of Fisheries managed to convince the top leaders of the Soviet Union that the importance of the Norwegian–Soviet research collaboration for the fishing industry, surpassed its policy implications. Photo: Gunnar Sætra / Institute of Marine Research

Another veteran, Vyacheslav Zilanov, said the same was true for the Soviets. Zilanov was present at the first Norwegian–Soviet research meeting in Murmansk, in 1958. Later, he acted as Deputy Minister of Fisheries in the Soviet Union, under Alexandr Ishkov.

Speaking of his former boss, Zilanov said: “Ishkov managed to convince both the Soviet premier (Alexey Kosygin) and the foreign minister (Andrey Gromyko) that this research collaboration in some ways transcended policy, and that it was important for the Soviet fishing industry.”